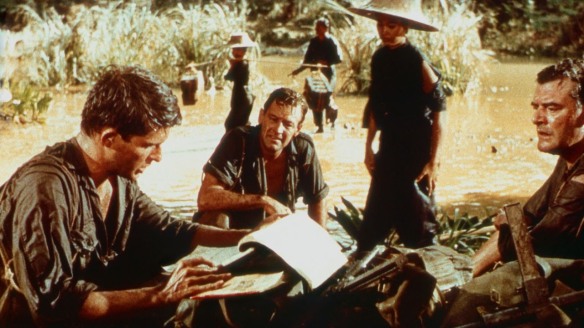 Major Warden: Sir, it’s most annoying. They say, in view of the time element, they don’t think a few practice jumps would be worthwhile.
Major Shears: No?
Major Warden: No, they say if you make one jump, you’ve only got 50% chance of injury, two jumps, 80%, and three jumps, you’re bound to catch a packet. The consensus of opinion is that the most sensible thing for Major Shears to do is to go ahead and jump, and hope for the best.
Major Shears: With or without a parachute?

Jack Hawkins and William Holden in the masterpiece that is Bridge on the River Kwai (1958). Winner of seven Oscars, the film is set in a Japanese prisoner of war camp during World War II and tells of the repercussions of building a successful bridge.

10 thoughts on “Line(s) of the Day #TheBridgeontheRiverKwai”