Everyone will have their favourite character from The Good Place (2016-), a show set in the afterlife and more shocks and twists than you could ever begin to imagine. Mine is the rather dim-witted Jason Mendoza (Manny Jacinto), the failed DJ (or rather “pre-successful”) with an unflinching loyalty to the Jacksonville Jaguars. 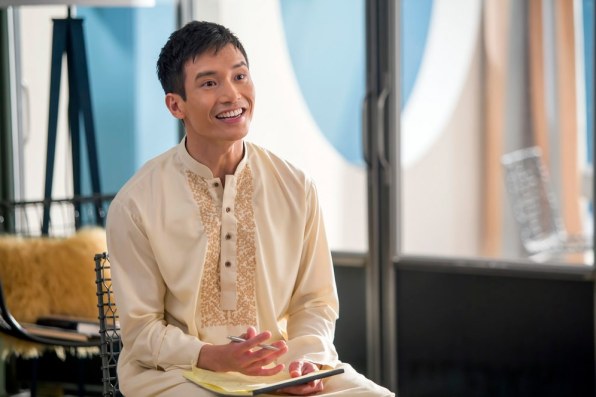 I can’t believe Michael betrayed us again. Why is it always the ones you most expect?

Jason: Can I ask you a question about where we’re going?
Eleanor: Sure.
Jason: Where are we going? I forgot.

Eleanor: I hate to be the bearer of bad news…
Jason: Uh, I think you mean Bad News Bear.

I’m too young to die and too old to eat off the kids’ menu. What a stupid age I am.

Michael: Jason, buddy. All you had to do was to keep quiet, but you couldn’t stop talking about Kendall Jenner or that dumb quarterback, what was his name, Derek Bortles? Always ranting about Derek Bortles. Lucky for you my friend, Jaguars games are the only ones televised in the Bad Place because they suuuck!
Jason: No they don’t! All we need is a defence and an offence and some rule changes.

Yo, you should listen to me. I came up with hundreds of plans in my life and only one of them got me killed.

Gel Mibson: … this person. A man who is so flagrantly ignoring the “one lollipop per customer” rule.
Jason: No, I walked out and back in each time, so I’m different customers.

Jason: I’ll tell you what I want to know right now before we go any further. Did the Jacksonville Jaguars win the Super Bowl last year?
Michael: Oh, you’re serious. No.
Jason: Will they every win the Super Bowl?
Michael: Jason, I can’t predict the future. But no, they won’t.