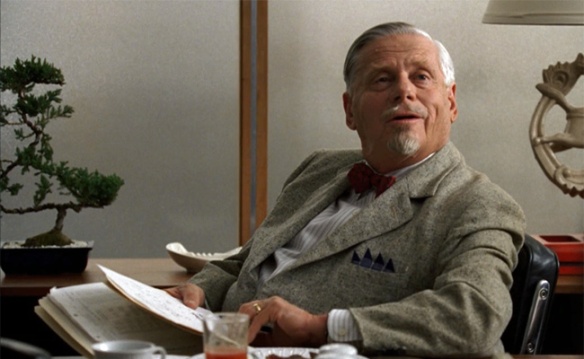 Bertram Cooper: Mr. Campbell, who cares?
Pete Campbell: What?
Bertram Cooper: Who cares?
Pete Campbell: Mr. Cooper, he’s a fraud and a liar. A criminal even.
Bertram Cooper: Even if this were true who cares? This country was built and run by men with worse stories than whatever you’re imagining here…. The Japanese have a saying. “A man is whatever room he is in,” and right now, Donald Draper is in this room. I assure you. There’s more profit in forgetting this. I’d put your energy into bringing in accounts.
Pete leaves the room
Bertram Cooper (to Don Draper) : Fire him if you want. But I’d keep an eye on him. One never knows how loyalty is born.

Robert Morse and Vincent Kartheiser in the superlative Mad Men (2007 – 2015), which is set in the 1960s and tells of a group of advertising executives working on Madison Avenue. The scene is one of the many fine examples of the betrayal, ambition and wisdom that was a feature of the 15-time Emmy winner,