With Novak Djokovic’s life on court continuing to unravel after his unceremonious dumping out of the French Open tournament, his relationship with his newly-hired coach Andre Agassi will be more vital than ever. As the finals of the male and female take place this weekend (Agassi is the last American male to win in Paris), here are eight quotes from the Las Vegan’s seminal autobiography Open. Published in 2009, three years after his retirement, it tells of the 47 year old’s struggle in losing is childhood to tennis, being a prodigy, his rivalries with other competitors and fall down the ranking after years of success. The hugely honest and insightful memoir also tells of his inspirational recovery to the top of the game and later contentment in retirement. You can also see my review of the book here. 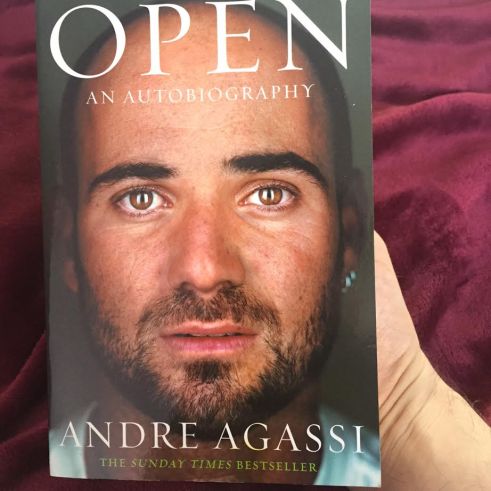 It’s no accident, I think, that tennis uses the language of life. Advantage, service, fault, break, love, the basic elements of tennis are those of everyday existence, because every match is a life in miniature. Even the structure of tennis, the way the pieces fit inside one another like Russian nesting dolls, mimics the structure of our days. Points become games become sets become tournaments, and it’s all so tightly connected that any point can become the turning point. It reminds me of the way seconds become minutes become hours, and any hour can be our finest. Or darkest. It’s our choice.

There’s a lot of good waiting for you on the other side of tired. Get yourself tired…

Hate brings me to my knees, love gets me on my feet.

Big dreams, are so damn tiring.

This is why we’re here. To fight through the pain and, when possible, to relieve the pain of others. So simple. So hard to see.

You know everything you need to know about people when you see their faces at the moments of your greatest triumph.

Life is a tennis match between polar opposites. Winning and losing, love and hate, open and closed. It helps to recognise that painful fact early. Then recognise the polar opposites within yourself, and if you can’t embrace them, or reconcile them, at least accept them and move on. The only thing you cannot do is ignore them.

I think older people make this mistake all the time with younger people, treating them as finished products when in fact they’re in process. It’s like judging a match before it’s over, and I’ve come from behind too often, and had too many opponents come roaring back against me, to think that’s a good idea.

24 thoughts on “Gr8at: Insightful and Revealing Quotes in Open by Andre Agassi”