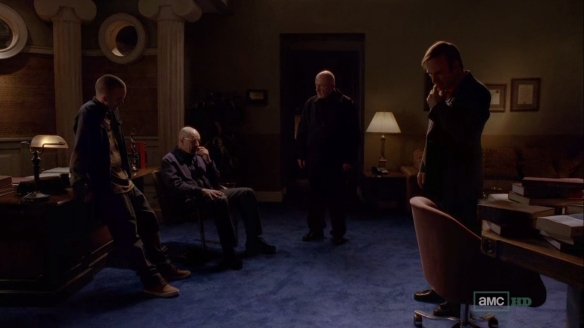 Saul Goodman: He’s okay? He said he was gonna break my legs. And don’t tell me he didn’t mean it, okay? ‘Cause he gave me the dead mackerel eyes. He meant it.
Walter White: Saul, Mike threatened me. He threatened Jesse. He probably threatened someone before breakfast this morning. It’s what he does. Come on. Grow a pair.

Bob Odenkirk and Bryan Cranston in Breaking Bad (2008 – 2013). Considered one of the greatest shows of all time, it was a critical and commercial juggernaut that won 16 Emmys and countless other awards in its five-year run. It told of a high-school chemistry teacher who gets involved in the drug dealing world by producing crystal meth so as to raise money for his lung cancer treatment.

12 thoughts on “Line(s) of the Day #BreakingBad”