While I haven’t been taking many photographs recently, my taste for spectacular images has far from abated. Do you have a favourite from the carefully chosen themed images below? Have you been to any of the countries covered? Feel free as always to make comments and suggestions. If you like these, then you’ll definitely want to check out these two posts, Spectacular National Geographic Images and National Geographic Animal Photographs.

You may not want into this 20 foot deep hole, known locally as Spouting Horn, but there’s no denying hoow beautiful it is (from a safe distance). This was taken in Oregon near Cape Perpetua, by Gary Fua.

Taken by Tracey Jennings, this shot really does reveal the beautiful and yet sinister way a seven gill shark moves around in the kelp forests of Sin Town, South Africa. 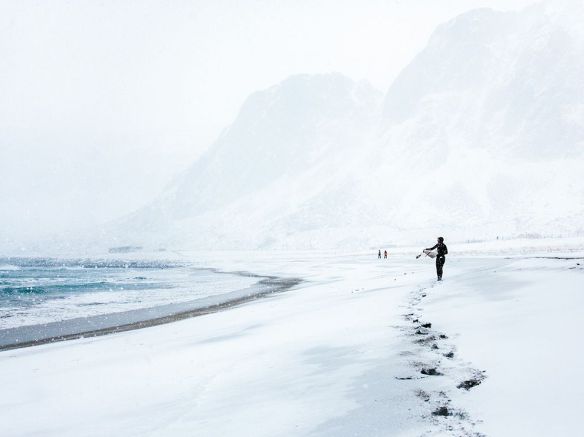 Surfing seems tricky enough during regular times, let alone during a blizzard, but that doesn’t stop some people. This shot, almost like a painting, was taken by Konsta Linkola in Norway’s Unstad Beach in the Lofoten Islands.

Like an ethereal aquatic heaven. Will Strathmann has captured something very special with this image of bioluminescence in Krabi, Thailand.

Fire and ice may sound more like a title for Game of Thrones, but here Konrad Kulis has brought it to photographic life. The dramatic contrasts were taken en route to the volcano Holuhraun, which last erupted in 2014.

Vanilla Ice may not have been singing about the Olfusa River, but it would certainly work as a title for the photo by Daniel Beltra of Iceland’s biggest river.

These sea turtles may not have the ninja skills of their cartoon relatives, but in photographer’s G. Lecoeur’s hands, the Tenerife stars couldn’t be any cuter.

Wonderfully timed, Alison Langevad captures the silent dignity of a group of buffalo under a night sky in Zimanaga Private Game Reserve