Since starting my Foreign Favourites, I’ve been delighted with the standard, analysis and range of genres, styles and nationalities covered. So it’s great news that I have another addition from the Norfolk-based Beetley Pete who in his charming blog shares his thoughts about his life in eastern England, including his interest in photography, his dog Ollie and the rural nature around him. Here are his thoughts on Czech film, Closely Watched Trains (1966). 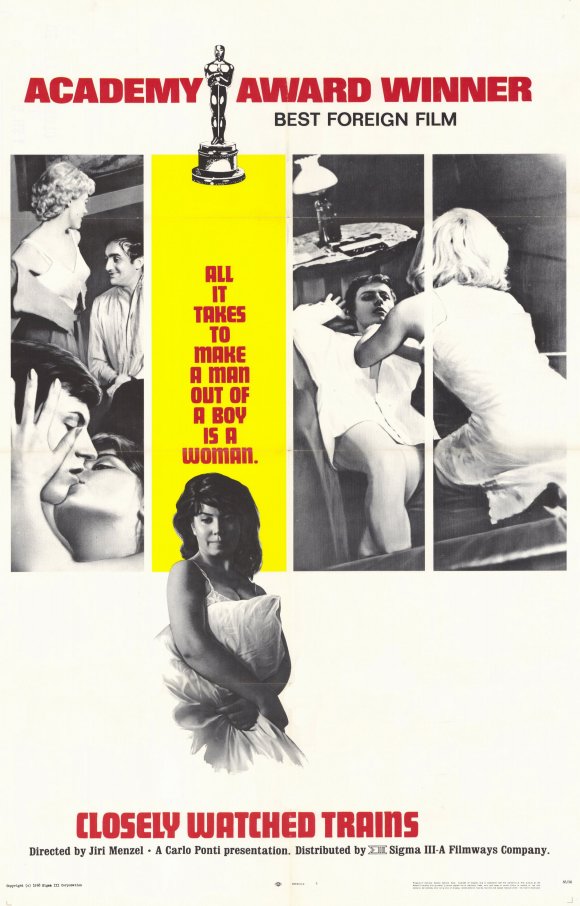 Quick summary: An apprentice train dispatcher at a village station seeks his first sexual encounter and becomes despondent when he is unable to perform.  (IMDB).

This is a film from Czechoslovakia, that won the Oscar for Best Film In A Foreign Language, in 1968. It was adapted from the book of the same name, directed by Jiri Menzel, and filmed in black and white. It is set in Nazi-occupied Czechoslovakia, in the latter part of the Second World war.

It follows the fortunes of young Milos, who has just started work at the railway station in his small town. He wants to do well, and follow in the family tradition, but he is also obsessed with his burgeoning sexuality, and confused by the situation of the war.

This film is often described as a coming-of-age drama, but it is a great deal more than that. It has a lot of humour, some interesting characterisations, and also deals with the resistance against the Germans, in the occupied countries. 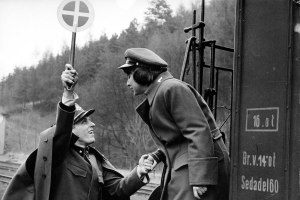 Like the rest of his family, Milos covets the prestige of the job on the railway, but doesn’t really want to do any work. He would sooner indulge in his sexual fantasies, in particular about the young conductor, Masa, or the flirtatious telegraph operator, Zdenica. He is teased by his male colleagues about his virginity, and resolves to do something about it. He manages to arrange an assignation with Masa, but his first sexual encounter proves to be a disaster, and he seeks advice from a doctor.

As all this is going on, the situation outside the station confines is getting serious. Local partisans are attacking the railway, and destroying or damaging German military trains. There are enthusiastic collaborators in the town, among them Zednicek, a local official who periodically arrives at the station to instill cooperation in the railway staff. Unknown to him, the womanising train despatcher, Hubicka, is working with the resistance. He has arranged to meet his contact, the attractive Viktoria. She is to deliver a bomb to him, to be placed on a German ammunition train. When they meet, he manages to persuade her to help young Milos lose his virginity, and she agrees. Milos is smitten with her, and the successful love-making makes him feel like a real man. 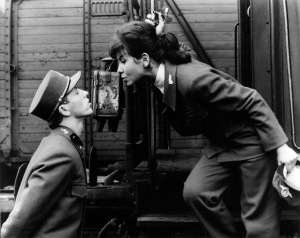 But Hubicka is unable to place the bomb on the train. By a quirk of fate, the railway choose just that moment to make him attend a disciplinary enquiry. He had been trying his luck with the telegraph operator, Zdenica, and his antics had included stamping her bare backside with the official railway rubber stamps. She hadn’t objected, but her mother had seen the marks on her daughter’s buttocks, and made an official complaint. Because of the scandal in the small town, Zednicek decides to hold an inquiry, by chance picking the very day that Hubicka is supposed to plant the explosives.

When young Milos realises that the bomb has not been set, he summons up his newly-discovered manhood, and drops it into the train himself. This wonderful little film manages to inject humour into the darkest of situations, a country occupied by a foreign invader during the war. It retains a wonderful sense of period, and a feel of innocence that is about to come to a sudden end. The direction and camera work is first-rate, and the cast use their small roles to great effect. As Milos, Vaclav Necar is consistently believable as an awkward youngster, with a selfish streak that is overcome by a fast transition into maturity.

Just when you think you have heard of every angle for a war film, you discover a film with a previously unexplored premise. Thank you Pete for such a wonderful review of a film I was not familiar with. It certainly sounds a unique take and really worth seeing.