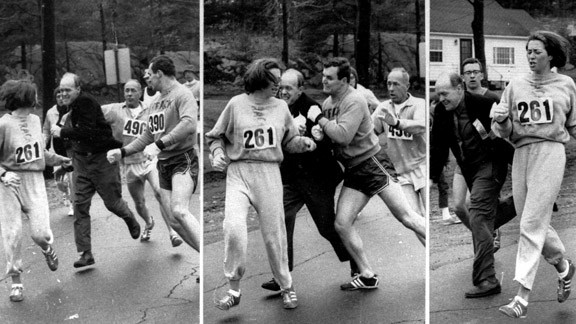 And then there’s political bravery. Kathrine Switzer was an amateur runner at Syracuse University in 1967, when she decided to challenge herself by running the Boston Marathon. Thing was, no woman had ever run the Boston Marathon before, and even her own coach didn’t believe it was possible for a poor, fragile, weak little woman to run 26.2 miles (“No dame ever ran the Boston Marathon!” he told her), but once she proved to him she could in a training run (with an extra five miles thrown in, just for yucks), they entered the race. Apparently there was nothing official in the rules preventing a woman from registering, but she wrote her name down as KV Switzer on the entry form anyway, just to be sure. Switzer, coach Arnie Briggs, her boyfriend (a 235-pound hammer thrower who didn’t bother training because if a woman could run a marathon, he could too) and another friend all piled into a car and headed to an unseasonably cold Boston.

All was going well until around the four-mile mark, when Switzer heard leather-soled footsteps behind her. “Instinctively I jerked my head around quickly and looked square into the most vicious face I’d ever seen,” she wrote in ‘Marathon Woman’, her memoir. “A big man, a huge man, with bared teeth was set to pounce, and before I could react he grabbed my shoulder and flung me back, screaming, ‘Get the hell out of my race and give me those numbers!’ Then he swiped down my front, trying to rip off my bib number, just as I leapt backward from him. He missed the numbers, but I was so surprised and frightened that I slightly wet my pants and turned to run. But now the man had the back of my shirt and was swiping at the bib number on my back.”

The outraged man in question turned out to be Jock Semple, the marathon director, who was promptly barged out of the way by the macho boyfriend. Switzer finished the race in four hours twenty minutes, but caused a press sensation for the eyebrow-raising feat of ‘running a long way while in possession of ovaries’, batting off the questions from journalists (“Are you a suffragette?” asked one hack with his finger firmly on the political pulse) about why she had entered the race with a Forrest Gump-esque “I like to run.”

She wrote: “I’ve stepped into a different life, I thought. To the guys it was a one-off event. But I knew it was a lot more than that. A lot more.” Switzer campaigned for women to be officially admitted to the race, which they eventually were in 1972, and went on to be a TV journalist.

Incidentally, the boyfriend hit the wall at about 13 miles and staggered home an hour after Switzer.

Taken from the Joy of Six feature: sporting bravery in The Guardian by freelance journalist Nick Miller.

12 thoughts on “Line(s) of the Day #NickMiller”