Frasier just wouldn’t have been the same without his hilariously down-to-earth producer Roz Doyle. Time then for a Gr8at saluting eight of her funniest lines on one of sitcom’s greatest achievements. 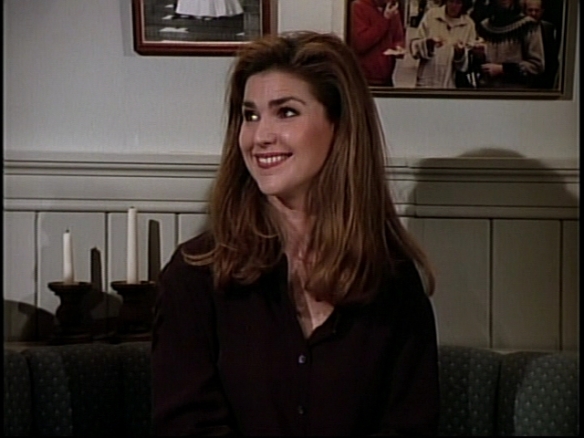 Frasier: I’m in Cassandra’s hotel room. She invited me up here after dinner. I’m just not sure what it means.
Roz: What it means? What it means is that even a blind pig finds an acorn once in a while.

Daphne: If you change the paper towels, he likes the flap facing the front. If you change the bathroom tissue, the flap faces the back, don’t ask me why.
Roz: I don’t know how you live with him.
Daphne: I don’t know how you work with him.
Roz: Well, I have learned a trick. When he’s really bugging me, I ask him if he hasn’t lost a little weight. Before you know if, he’s checking his butt out in the glass of the candy machine.
Daphne: Really? I tell him he’s gained weight. He skips dinner, sulks in his room, and I have the whole evening to myself.

Roz: [answers phone] Hello?
Frasier: Roz, it’s Frasier. Look, I need your help.
Roz: Well, I don’t have much time, I’m on my way out.
Frasier: OK, just answer me this: How do you know if you’re on a date?
Roz: Are you alone?
Frasier: Yes.
Roz: Then you’re not on a date.

Frasier: Roz, why is it every time I attempt to have a serious discussion we always end up talking about your sex life?
Roz: Because I have one.

Frasier: And to think I was going to offer you these basketball tickets.
Roz: Well, can’t use ’em anyway. I have a date with this French guy.
Frasier: So that’s it, huh? No Americans left.

Roz: I can’t work with a guy that handsome…! No offense.
Frasier: Oh, none taken. Granted, when it comes to looks, Dr. Webber and I aren’t in the same…
Roz: Species?
Frasier: Well, I was going to say “league,” but “species” is so much more insulting.

Roz : Oh, my God. You have two women?
Frasier: At least.
Roz: And you’re juggling them? And you’re getting jewelry?
Frasier: Why is that so hard to believe?
Roz: Well, I guess since they cloned that sheep, anything’s possible.

Roz: You’ll be happy to know that Clarence is doing a lot better. I just dropped his card off.
Frasier: Clarence?
Roz: Yeah, Clarence the guard.
Frasier: Oh, down at the station, Clarence, oh yes, good. I didn’t know he was sick.
Roz: You signed his get-well card.
Frasier: You mean that wasn’t a birthday card?
Roz: No, he’s in the hospital having a kidney transplant.
Frasier: Oh my God, I thought it was his birthday! I wrote, “Dear Clarence, you’re not getting older, you’re just getting closer to death”!